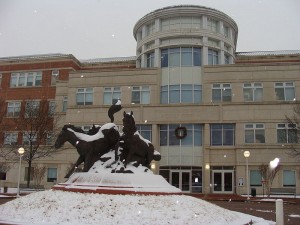 A recent article from a local Maryland newspaper, The Gazette, highlighted a lawsuit brought by The Gowen Group against the Town of Brentwood, Maryland and a former Brentwood councilwoman. The lawsuit was brought by citizens of the town who noticed that elected officials awarded $27,000 through a grant from Prince George’s County to a former council member, a clear violation of the town’s charter and ethics rules.

END_OF_DOCUMENT_TOKEN_TO_BE_REPLACED END_OF_DOCUMENT_TOKEN_TO_BE_REPLACED

This past week much attention has been on our nation’s highest court. While most of the attention was focused on the Supreme Court’s decision regarding the Affordable Care Act, the Supreme Court also handed down a decision in Miller v. Alabama, a case involving two 14 year-old offenders convicted of murder from Arkansas and Alabama.  Both were sentenced to life imprisonment without the possibility of parole.  In a 5-4 decision written by Justice Elena Kagan, the Court found that the mandatory nature of the punishment as well as preventing the sentencing authority from taking a juvenile’s ‘lessened culpability’ and ‘capacity for change’ into account, violated the Eight Amendment of the Constitution.

END_OF_DOCUMENT_TOKEN_TO_BE_REPLACED

Millions and millions of Americans die each year without a will (or “intestate”) and leave their families with unintended consequences and sometimes major headaches.

While it’s an unfortunate fact that we’re all going to die some day, it’s also a fact that we prefer not to dwell on it if we can avoid it, and a will makes us do just that.  A survey conducted in 2012 found that almost half of Americans are intestate.

END_OF_DOCUMENT_TOKEN_TO_BE_REPLACED

On Thursday, May 31, 2012 the First Circuit Federal Court of Appeals, sitting in Boston, ruled that Section 3 of the Defense of Marriage Act (DOMA) violates the Constitution and should be struck down. [Decision here.]

Section 3 of DOMA states marriage is between a man and a woman, which means that gay married couples are ineligible for federal benefits, such as tax breaks and Social Security survivor benefits afforded to straight couples, those benefits being based on the marriage state.