In a recent post entitled ‘Why Firing a Bad Cop is Damn Near Impossible‘, Mike Riggs of Reason.com recounts the now infamous pictures of Rhode Island police officer Edward Krawetz kicking a handcuffed women in the head.

Three years later, in March of 2012, Officer Krawetz was convicted of felony battery, but his 10 year sentence was immediately suspended in lieu of anger management classes. Riggs’ article draws attention to the fact that despite the conviction and public scrutiny, Krawetz was not fired from the Lincoln Police Department, mostly thanks to the “law enforcement bill of rights.”

END_OF_DOCUMENT_TOKEN_TO_BE_REPLACED

The Gowen Group is proud to announce a new service for small businesses so they, too, can have an attorney at their disposal–and at a fraction of the cost!

Whether your small business is just-established or a community institution, you need to make sure its interests and finances are protected. Small businesses often forgo even the most basic of legal advice when entering into contracts or in the decision making process because of the cost—only to later discover that a simple review by an attorney could have saved thousands of dollars in legal fees. To help protect your small business, its reputation, and its bottom line, the Gowen Group Law Office announces its Virtual General Counsel Service for small businesses.

The Virtual GC allows you the ease of service by being able to work with us from virtually any location. Additionally, our attorneys can work with your schedule and are available to come to your place of business. It is like having an in-house attorney on your staff!

The purpose of the Virtual GC is to bring excellent legal services and peace-of-mind to small businesses at a price they can afford. The Virtual GC allows your company to remove the uncertainty of being billed by the hour. Instead, you pay a flat monthly fee for unlimited basic legal services, including:

Visit our website today for more details and to see how we can help your small business.

About two weeks ago was the memorial service for one of my former clients, Ms. Shirley Riley. I met Ms. Riley through some pro bono work I was doing for her in March 2009 for the Washington Legal Clinic for the Homeless. At that time I was nearly a year into doing pro bono work for the Clinic; but it was through Ms. Riley’s set of circumstances that I became intimate with the functions of the D.C. Department of Human Services (DHS) and its failings with regard to serving those with disabilities in the DC shelter system. It was also through Ms. Riley’s situation that I became even more intimate with the good pro bono legal work can do for individuals and society-at-large.

Ms. Riley had impairments that required she have an accessible room and a location with no communal setting. She was placed at one of the city’s main shelters, DC General, which provided neither of these accommodations at the time. Taking the typical course of action, I began using the administrative process to have Ms. Riley moved to a better environment. Unfortunately, my efforts were not initially being responded to by DHS. I even had to go so far as to testify before DHS on Ms. Riley’s behalf to bring its shortcomings to the attention of DHS leadership. Ms. Riley was eventually moved from the shelter to an apartment-style residence and provided a more accommodating environment. In the end, litigation was initiated by Ms. Riley and my colleague at the Legal Clinic, Amber Harding.

END_OF_DOCUMENT_TOKEN_TO_BE_REPLACED

This past week much attention has been on our nation’s highest court. While most of the attention was focused on the Supreme Court’s decision regarding the Affordable Care Act, the Supreme Court also handed down a decision in Miller v. Alabama, a case involving two 14 year-old offenders convicted of murder from Arkansas and Alabama.  Both were sentenced to life imprisonment without the possibility of parole.  In a 5-4 decision written by Justice Elena Kagan, the Court found that the mandatory nature of the punishment as well as preventing the sentencing authority from taking a juvenile’s ‘lessened culpability’ and ‘capacity for change’ into account, violated the Eight Amendment of the Constitution.

END_OF_DOCUMENT_TOKEN_TO_BE_REPLACED

Millions and millions of Americans die each year without a will (or “intestate”) and leave their families with unintended consequences and sometimes major headaches.

While it’s an unfortunate fact that we’re all going to die some day, it’s also a fact that we prefer not to dwell on it if we can avoid it, and a will makes us do just that.  A survey conducted in 2012 found that almost half of Americans are intestate.

END_OF_DOCUMENT_TOKEN_TO_BE_REPLACED

On Thursday, May 31, 2012 the First Circuit Federal Court of Appeals, sitting in Boston, ruled that Section 3 of the Defense of Marriage Act (DOMA) violates the Constitution and should be struck down. [Decision here.]

Section 3 of DOMA states marriage is between a man and a woman, which means that gay married couples are ineligible for federal benefits, such as tax breaks and Social Security survivor benefits afforded to straight couples, those benefits being based on the marriage state.

END_OF_DOCUMENT_TOKEN_TO_BE_REPLACED

Recently, news came out that Senators from both sides of the aisle are supporting the UN Convention on the Rights of Persons with Disabilities. This treaty, while signed by President Obama in 2009, still needs ratification by the U.S. Senate to have full effect here in America. This bipartisan support is promising not only for a frequently-gridlocked Senate, but the fate of this historic, yet stalled, treaty.

There has been a concerning argument by those opposing the treaty that ratification will override U.S. law and force those in our country to have additional legal and financial obligations. These fears are not only unfounded, but contrary to what would happen if the treaty goes into effect.

END_OF_DOCUMENT_TOKEN_TO_BE_REPLACED 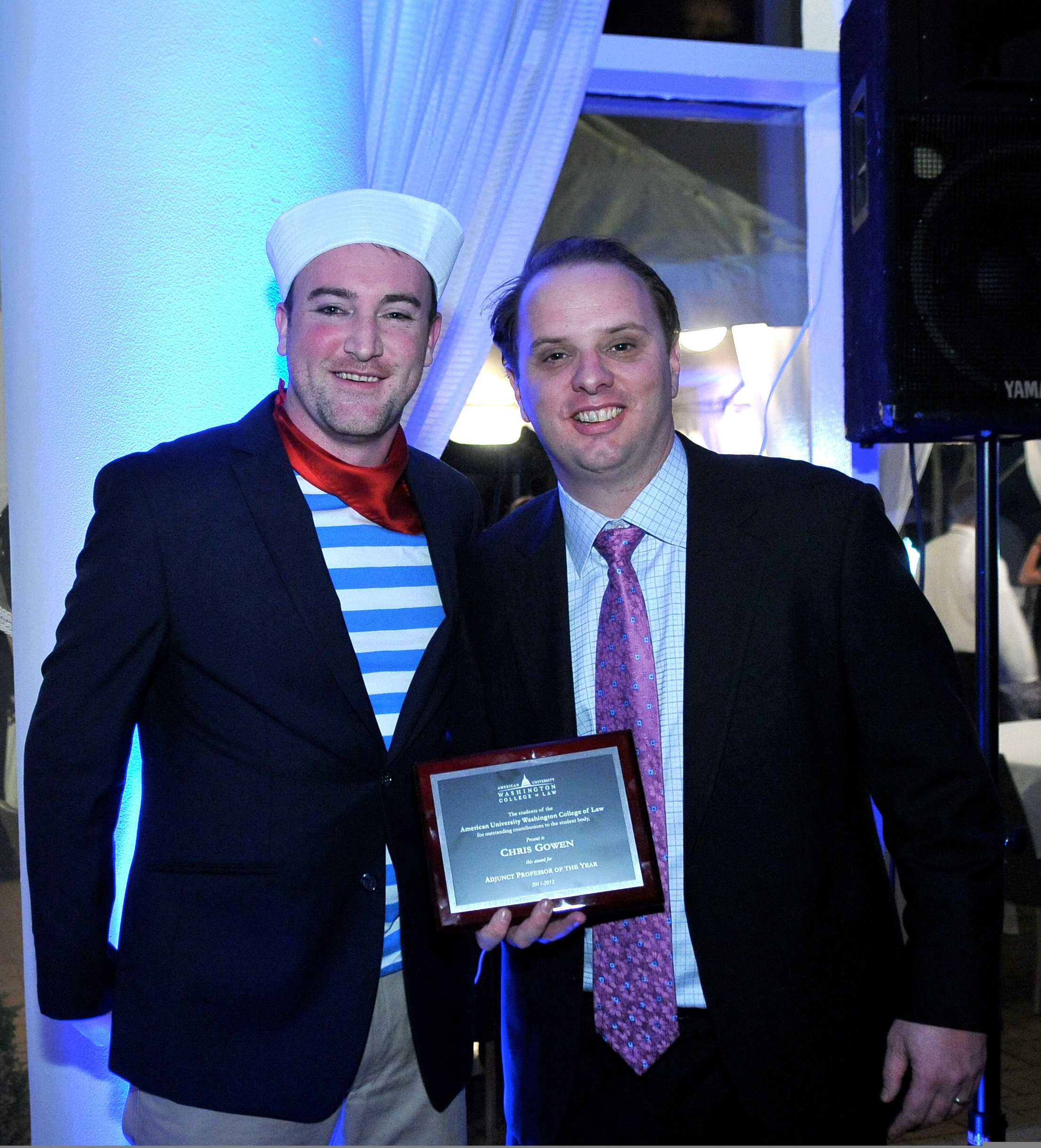 This April, Gowen Group partner Christopher Gowen was awarded the 2012 Adjunct Professor of the Year Award at American University, Washington College of Law where he teaches both Legal Ethics and Upper Level Seminars.  One of four hundred adjuncts, Chris began teaching at the Washington College of Law in May 2010, quickly becoming a favorite among the student body for not only his command of, and passion for, the law but also his humor and compassion.  “The award was well-chosen,” observed Brenna Daugherty, one of Chris’ students this past year, “My law school experience is a better one for having worked with him.”

END_OF_DOCUMENT_TOKEN_TO_BE_REPLACED On April 19 and 20, the National Federation of the Blind held its fifth annual tenBroek Disability Law Syposium. This yearly event began as a one day affair with less than 50 participants. With a stellar reputation in the disability legal community, the syposium now is nearly two days long, has dozens of attendees, and draws keynote speakers from the upper levels of government, such as former U.S. Senator Chris Dodd and Assistant U.S. Attorney General for Civil Rights Thomas Perez.

This year the Gowen Group was proud to have Bill Phelan, partner in charge of the firm’s disability law practice, speak at the event.

END_OF_DOCUMENT_TOKEN_TO_BE_REPLACED

You may have noticed that the Gowen Group’s website looks a little more en vogue. Thanks to the professional services of Rachael Dean Photography, the attorneys partook in a photo shoot at their downtown DC office. In addition to some of the fantastic staff shots Rachael was able to grab, she provided some pictures of the DC area to give our website some local flair.

You can find the choice photos on our website, but check out the additional shots below.